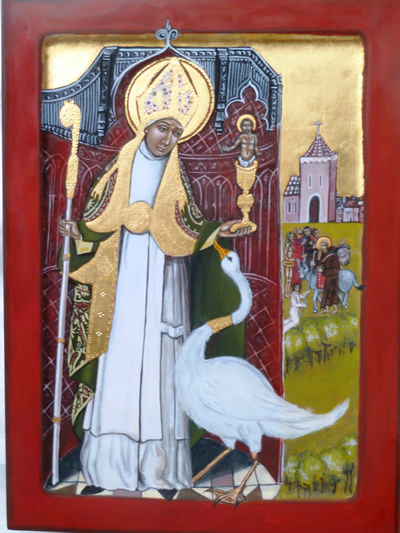 St. Hugh of Lincoln, known as “the Hammerer of Kings,” had frequent encounters with two of England’s most headstrong monarchs—Henry II and Richard the Lion-Heart.

Hugh, the son of Burgundian nobility, went from France to England as a young Carthusian monk in 1180 to be prior of the monastery Henry II was establishing at Witham, Somerset in penance for the murder of St. Thomas Becket.

When Hugh arrived, he found no provision had been made to house the people who were being evicted from their homes to make room for the monastery. He immediately refused to take office until the king had compensated the people ”down to the last penny.”

Six years later he became Bishop of Lincoln, and he used all the authority of his office to restore ecclesiastical discipline among his clergy. He was especially strict about the evil practice, by some of the clergy, of extracting improper fees.

Hugh especially loved the outcast and oppressed. He reached out to those afflicted with leprosy, the sick and the poor. Hugh would wash and dry leper’s feet, sit with them and embrace and kiss them one by one.

During the epidemic of Jew-baiting which broke out in England at the time of the Third Crusade (1189-93), Hugh single-handedly faced an armed and angry mob on three occasions (once in his own cathedral)and persuaded them to spare their victims. It is not surprising that when he died in 1200, Jews wept in the streets of Lincoln, crying out, “This was a true servant of the great God.”

in those days England was still wracked by antagonism between Saxon and Norman, an aftermath of the Norman Conquest of 1060. Hugh, by his personal charm, his devotion to Christ, his pastoral concern for the poor and oppressed, and his courage in speaking the truth in love to King Henry and King Richard—both known for their murderous opposition to the Church—became the first mutual hero to a hitherto divided society.

In 1192 he began the repair and expansion of the Cathedral in Lincoln (damaged in an earthquake in 1185), To many historians, Hugh, despite his inability to speak the language, was the first true Englishman and “the best bishop of the middle ages.”

Hugh’s symbols are a swan, for monastic tranquility, a Star of David in the crook of a crozier for his defense of the Jews, and a chalice with the Christ-child and the host, as the pledge and seal of his priestly vocation.
Image: St. Hugh of Lincoln Icon on Constantina Icons http://bit.ly/StHicon